Absorption generally refers to two phenomena, which are largely unrelated. In one case, it refers to when atoms, molecules, or ions enter some bulk phase – gas, liquid or solid material. For instance, a sponge absorbs water when it is dry.
Absorption also refers to the process by which the energy of a photon is taken up by another entity, for example, by an atom whose valence electronic energy levels. The absorbed energy may be re-emitted as radiant energy or transformed into heat energy. The absorption of light during wave propagation is often called attenuation/ The tools of spectroscopy in chemistry are based on the absorption of photons by atoms and molecules. 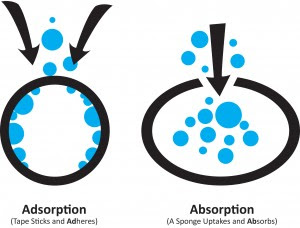 Adsorption is similar, but refers to a surface rather than a volume; adsorption is a process that occurs when a gas or liquid solute accumulates on the surface of a solid or, more rarely, a liquid (adsorbent), forming a molecular or atomic film(the adsorb-ate). It is different from absorption, in which a substance diffuses into a liquid or solid to form a solution.