Melamchi Drinking Water project is designed and is now in construction phase to provide fresh water to Kathmandu and meet the daily demand of around 350 ML.
It was started on 28th November, 2001. 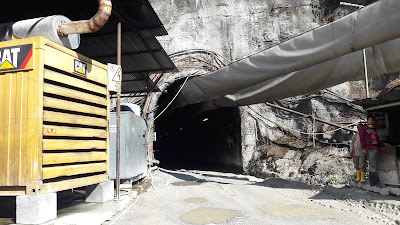 This project is subdivided into three sub projects for making the work easier and to complete it in time. They are:
Subproject I
Subproject II

Project progress
The main project task is to construct tunnel. The total length of tunnel to be constructed is around 27.5 KM. Around 21.7 KM of tunnel construction is finished and 5.86 KM of remaining work is in construction phase.

Process of Tunneling
Heavy machines are used in tunneling. Some of the machines and equipments are:
Process
i) Survey is done for a particular length (around 5-10m) and report is prepared in each phase for proceeding further work.
ii) Drilling is done on the face and explosives are inserted inside the hole. (Electric blasting is done)

iii) The materials (rocks/soils/boulders) are taken out in a tractor.
iv) Concrete is prepared in a computerized concrete mixer as per the geology report ( like rock type, side stability, water condition etc. ).
V) Thus formed concrete is sprayed at the top and side of the tunnels for its stability.
Vi) If it is necessary to provide bolting then drilling is done at first and bolts are inserted inside the drills which are fastened by pressurized mortar.
vii) Wire meshing is done in very weak zone.
viii) Most of the above works are done by electric equipments so there are two big generators outside  the tunnel. 5000L of diesel gets finished in around 2-3 days just for electric power because the voltage of NEA electricity is not sufficient to run the heavy machines/equipments.
viii) After stabilizing the side and top of the tunnel, next phase is started with geological survey.
ix) 3-4 such phase are done in 1 day i.e around 15-30m of tunnel is constructed in 1 day.

Why is this project taking so much time to complete ?
Let’s list it in points..
i) At first, tunnel construction is not an easy job. As you read the process of tunneling, it clearly suggest that tunneling has certain procedure to follow. And our geology differs in short span which makes tunneling more harder.
( In other countries tunneling seems fast. Its because they have TBM( Tunnel Boring Machine). We don’t have a single TBM in Nepal)

ii) Poor management board and contractor are another reason. At first, the project was given to chinese contractor which delayed the overall procedure. Now, it is given to Italian which is working day and night to complete the work in time.

iii) Blockade and Earthquake are another two reasons of delay in tunneling. They delayed the overall process by  1 and half years.

iv) Other reasons are like roads, infrastructures, materials availability and workers protest etc.
One example: We went to Gyaldung Tunnel. When we went to the construction site the whole work was stopped, generators were off and all the machines were off. We asked the reason of stopping the work and they said “Diesel is finished”. They also added” It will affect the whole procedure of a day”.
So, these small things play vital role in whole tunneling procedures.

v) Most of us think that its all due to politician, parties, governments etc. and all are doing corruption ..
But the real fact is not the same as we think. Yes, we lack some strict policy and formula of doing things faster in ground. But it doesn’t mean that the reason of everything are politician. Let’s be positive !!!!
And believe me, Melamchi drinking water project will be completed in  2 years and after 3 years we will get the water in our taps.
I can assure you this !!!
Cheers everyone !!
Keep motivating and inspiring …

Advanced Technologies that can Enhance Road Construction and Maintenance