It’s usual that we keep wondering why the nature is so pleasing,wonderful and balanced.Now designers it’s your time to get introduced to the golden ratio.The Golden Ratio, or The Divine Proportion, refers to the amount of space found between objects or the relationship between numbers. … If they took this rule a little further, closer to the 1:1.618 ratio, it would be in line with the Divine Ratio.

The Golden Ratio is a common mathematical ratio found in nature, which can be used to create pleasing, organic-looking compositions in your design projects or artwork. It’s also known as the Golden Mean, The Golden Section, or the Greek letter phi. Whether you’re a graphic designer, illustrator or digital artist, the Golden Ratio can be used to bring harmony and structure to your projects.

In this article, we’ll explain what it is and how you can use it. We’ll also point you towards to some great resources for further inspiration and study. While you’re brushing up on your skills, you might also want to check out our guides to other essential art techniques, including grid theory and colour theory.

What is the Golden Ratio?

Closely related to the Fibonacci Sequence (which you may remember from either your school maths lessons or Dan Brown’s The Da Vinci Code), the Golden Ratio describes the perfectly symmetrical relationship between two proportions.

Approximately equal to a 1:1.61 ratio, the Golden Ratio can be illustrated using a Golden Rectangle. This is a rectangle where, if you cut off a square (side length equal to the shortest side of the rectangle), the rectangle that’s left will have the same proportions as the original rectangle.

Use of golden ratio

It’s believed that the Golden Ratio has been in use for at least 4,000 years in human art and design. However, it may be even longer than that – some people argue that the Ancient Egyptians used the principle to build the pyramids.In more contemporary times, the Golden Ratio can be observed in music, art, and design all around you. By applying a similar working methodology, you can bring the same design sensibilities to your own work. Let’s take a look at a couple of examples to inspire you.

Ancient Greek architecture used the Golden Ratio to determine pleasing dimensional relationships between the width of a building and its height, the size of the portico and even the position of the columns supporting the structure.

The final result is a building that feels entirely in proportion. The neo-classical architecture movement reused these principles too.

Leonardo da Vinci, like many other artists throughout the ages, made extensive use of the Golden Ratio to create pleasing compositions. In The Last Supper, the figures are arranged in the lower two thirds (the larger of the two parts of the Golden Ratio), and the position of Jesus is perfectly plotted by arranging golden rectangles across the canvas.

The Golden Ratio can assist in creating images that have a strong composition, which will attract viewers to your photograph.

The reason for this is simple, the Golden Ratio allows for a composition that is perfectly balanced from a viewer’s perspective, creating a photograph that is most pleasing to the human eye. We naturally prefer to look at an image that is balanced and harmonized, and the Golden Ratio provides this.

Famous works of art such as the Mona Lisa, the Last Supper, and The Birth of Venus, among others, are all rumoured to have been composed based on the Golden Ratio. In fact, the Golden Ratio has also been called ‘natures number’ because it is said to appear everywhere throughout nature, from the nautilus shell to the sunflower.

This is what we as photographers should strive for. Your viewers do not want to work to see a beautiful photograph, they just want to see it.

Photography is about creating something that is visually appealing, and using the Golden Ratio as a design principle is just one way we can achieve this.

Applying The Golden Ratio In Art

Now we can get to some of the more interesting applications of the golden ratio.

The golden ratio has been used by artists to locate aethetically pleasing areas to place our subjects and distribute weight in our paintings.

The Eyes Of The Golden Rectangle

One technique is to use the “eyes of the rectangle” to position your subjects. These “eyes” are indicated in blue below:

Another option is to segment your painting into nine unequal sections using the golden ratio.

The Golden Ratio In Paintings

In this painting by Georges Seurat, the golden ratio appears to have been used throughout the painting – to define the horizon, to place points of interest and to create balance in what would appear to be a very active scene. 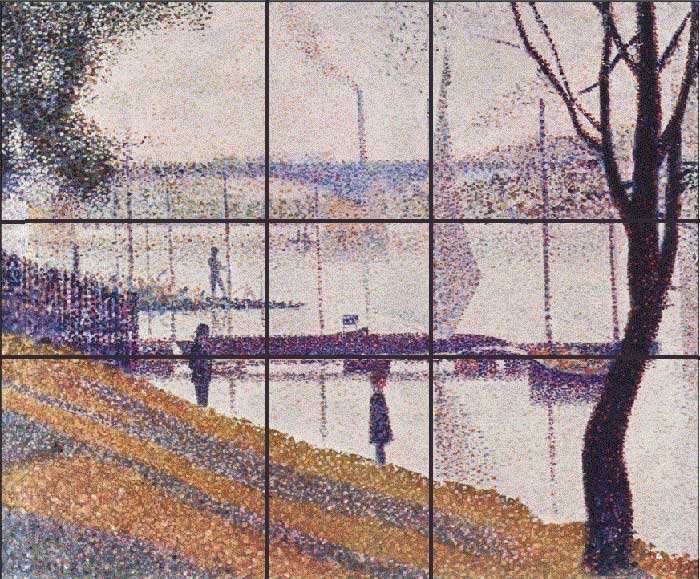 The golden ratio even appears to have been used in this classic painting by Michelangelo. 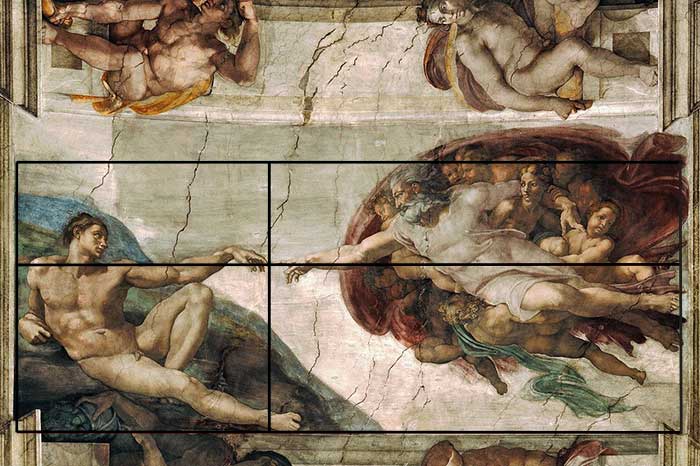 Michelangelo, The Creation of Adam, 1512

The majority of famous paintings do not follow the golden ratio. But by using the golden ratio you may have a greater chance of your painting being aethetically appealing.

Let us know your thoughts in the comment section below.

Best Engineering Projects of all time