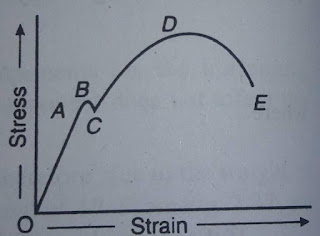 The stress- strain diagram for a mild steel specimen under tensile test is shown in Fig. We see that from O to A is a straight line which represents that the stress is proportional to strain. It is thus obvious that Hook’s law holds good up-to point A, which is called elastic limit. When the material is stressed beyond this limit (i.e point A), the strain increases more quickly than the stress. The points B and C are called the upper yield point and lower yield point respectively. The stress corresponding to point D is called Ultimate Stress. After the specimen has reached the ultimate stress, a neck is formed which decreases the cross-sectional area of the specimen. A little consideration will show that the stress (or load) necessary to break away the specimen at point E is less than the ultimate stress. The stress corresponding to point E is called Breaking Point.

Some of the formula are shown in the figure below:

Difference between Triangulation vs. Trilateration